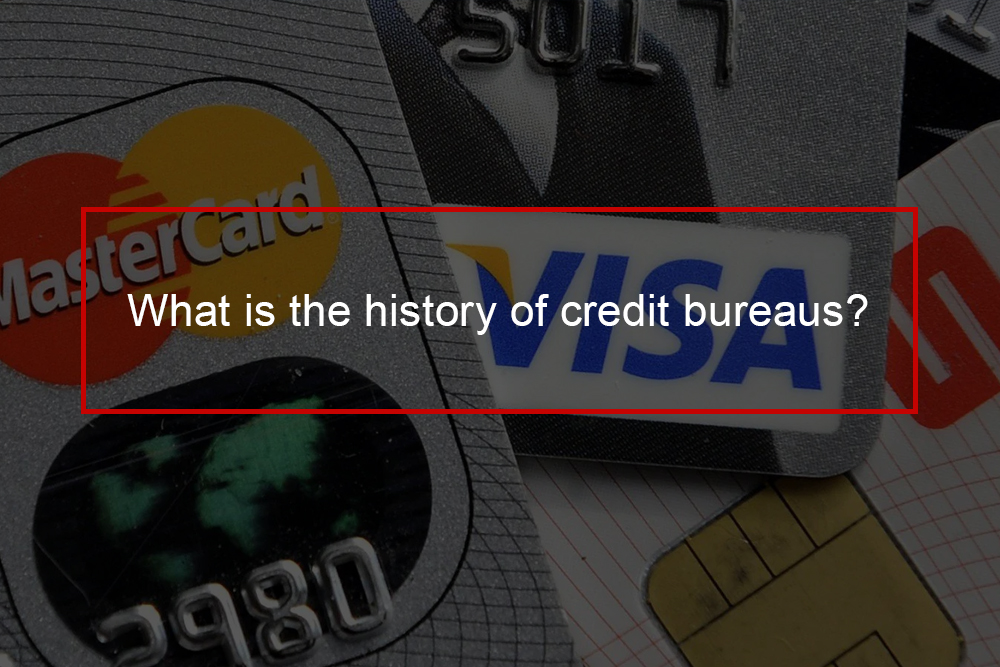 The idea of credit bureaus can be traced back to the early 1860s. Back then, credit bureaus functioned mainly to offer local merchants with a form to maintain tabs on the people who did business and traded in their immediate region. Essentially, the Credit Bureau comprised of a list of individuals who had reduced credit risks. Before the utilization of a list, merchants extended only a very small amount of credit, and that was based only on personal knowledge of the merchant.

However, after World War 1, the industry really started to take shape. The community became more mobile, and several advances in technology and electronic data assisted the progress. With a mobile population came a broader foundation of merchants, and the credit market stepped in to offer information on clients that could be used to determine whether or not to grant credit. Data provided by the early industry comprised of data from landlords, employment records, data in public records, and sometimes direct investigations of individuals.

In this feature, we will look at how the big-three credit bureaus came to be- TransUnion, Equifax, and Experian.

What is a credit bureau?

Credit bureaus are clearinghouses of information on consumers. A credit bureau records each time you fill out a credit application, miss a payment, or anytime you do anything that has to do with your finances. The bureau then uses this information to make your credit score.

When you are in the process of looking for a new car, or buying a house or even trying to get a credit card, the banks and the credit companies pull out your credit score to evaluate your creditworthiness. They want to see how well you manage borrowing money, and if you are going to be worthy of getting a new line of credit. In case your credit score is bad enough, you are denied a loan, or at least offered a higher rate since you have shown you cannot handle credit well.

In short, credit bureaus offer information to lenders and mortgage brokers to help them make decisions about who to provide credit to and who to avoid. But how did the three credit bureaus get started, and why is it essential to know?

The history of the three credit bureaus

How were the credit bureaus created?

The idea of credit has been around for many years. Babylon’s Code of Hammurabi configured maximum loan interest rates, and when Roman statesman Cicero’s neighbor purchased a large parcel of land, he managed it with credit notes. However, back in those days, just like today, one could not tell if someone was creditworthy based on their appearance alone. Just because a man wears fancy clothes or many many properties did not mean he was necessarily going to pay back his debts. Some system based on past credit habit was required to make better lending decisions.

A group of English tailors begun sharing information about customers who did not pay their debts in 1803. Twenty-three years later, the Manchester Guardian Society, which would then become a significant section of Experian, was developed and began sharing a monthly newsletter with information about people who were not paying their debts.

In 1864, in New York, a company known as the Mercantile Agency, later renamed R.G Dun and organization, developed a formal ranking system for the creditworthiness of organizations. Thirty-five years then, the Retail Credit Company (currently Equifax) began collecting customer information in Atlanta.

Even though there are many smaller credit reporting agencies, the vast majority of lenders and today utilize one or more of the Big Three credit bureaus.

The history of Equifax credit bureau

The oldest of the three credit reporting agencies, Equifax, was developed in 1899 as Retail Credit Company. The company grew very fast and had offices all over the United States and Canada in the 1920s. By the 1960s, Retail Credit Company had credit information and files on millions of Americans and would share it with just about anyone.

RCC’s willingness to distribute their extensive information to just about anyone, as well as their move to computerize their records, led to the formation of the Federal Fair Credit Reporting Act in 1975. Up until then, it had been a bit of the wild, and regulators knew there had been laws in place to govern the credit industry and protect consumers.

RCC suffered some bad PR around this period and re-branded as Equifax by 1975 to improve its image.

The history of TransUnion credit bureau

TransUnion was developed in 1968 to be the holding organization of Union Tank Car, rail transportation equipment organization. In 1969 TransUnion moved into the credit reporting industry and started acquiring smaller regional and major credit bureaus, which typically had contracts with local retailers.

The only way to obtain a contract with these local retailers was to purchase the credit organization that possessed the contract. Today, TransUnion has over 250 offices in the United States and 24 countries around the globe.

The history of Experian credit bureau

Experian is the newest of the three credit bureaus. Founded in 1980 in Nottingham, England, as CCN Systems, Experian moved in the United States credit industry in 1966 with its acquisition of TRW Information Systems. Experian has kept on growing, and now has operations in 36 countries globally. They were founded across the pond in England in 1980 as CNN Systems.

That credit score is known as your FICO (Fair Isaac Corporation ) score. This three-digit score, which varies between 350 and 800, helps potential creditors and lenders to get a feel for your creditworthiness at a glance — the same way a letter grade of GPA summaries how a student is doing in school.

In the early days of credit bureaus, local merchants were sharing information about residents who may be bad credit risks, and it did not comprise much more than a list of people who had not paid off their debts.

Today credit bureaus manage billions of points of data each month and monitor activity on at least a billion credit cards in the US. Based on the myriad of data they gather, they make decisions about the creditworthiness of individuals and assign then credit scores. People can also access their credit reports online these days and make disputes about the accuracy of the data recorded there. It would have been very challenging in the past.

Also, thanks to the Fair Credit Reporting Law, you can go to the government’s website at AnnualCreditReport.com and view your credit report from all three credit bureaus. Not only that, but there are also ways to check the credit score through free or paid services, so it easier to evaluate how good or bad your credit case is. This is much easier than it would have been back in the early days of credit bureaus.

When it comes to technology, it has presented some challenges to the three credit bureaus, as well as offered a wealth of new opportunities. Even though the bureaus have primarily been cautious of moving their operations online, the demand from increasingly savvy clients to know what their credit files contain has prompted all three bureaus to explore various online services, like viewing your report online, and allowing online disputing of incorrect items.